With Sky, users can now float through the skies via Google Earth. This easy-to-use tool enables all Earth users to view and navigate through 100 million individual stars and 200 million galaxies. High resolution imagery and informative overlays create a unique playground for visualizing and learning about space. 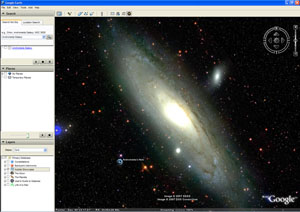 To access Sky, users need only click "Switch to Sky" from the "view" drop-down menu in Google Earth, or click the Sky button on the Google Earth toolbar. The interface and navigation are similar to that of standard Google Earth steering, including dragging, zooming, search, "My Places," and layer selection.

As part of the new feature, Google is introducing seven informative layers that illustrate various celestial bodies and events:

Backyard Astronomy – The Backyard Astronomy layer lets users click through a variety of placemarks and information on stars, galaxies, and nebulae visible to the eye, binoculars and small telescopes. This layer is useful for the amateur astronomer who may benefit from a comprehensive, organized way to reference fragments of the night sky.

Moon – The Moon layer displays animations of two months of both lunar positions and moon phases.

Planets – The Planets layer illustrates the seven official planets and their positions in the sky two months into the future.

Sky was created by Google’s Pittsburgh engineering team by stitching together imagery from numerous scientific third parties including the Space Telescope Science Institute (STScI), the Sloan Digital Sky Survey (SDSS), the Digital Sky Survey Consortium (DSSC), CalTech’s Palomar Observatory, the United Kingdom Astronomy Technology Centre (UK ATC), and the Anglo-Australian Observatory (AAO). The initiative was born out of the University of Washington’s participation in the Google Visiting Faculty Program, which makes it possible for leading academic researchers to visit Google for 6-12 month periods.

"We’re excited to provide users with rich astronomical imagery and enhanced content that enables them to both learn about what they’re seeing above and tell their own stories," said Lior Ron, Google Product Manager. "By working with some of the industry’s leading experts, we’ve been able to transform Google Earth into a virtual telescope."

"Sky is a very cool new feature for anyone who has ever looked up at the sky and wanted to know more," said Sally Ride, former astronaut and CEO of Sally Ride Science. "I think this is a great tool for satisfying that curiosity."

"Never before has a roadmap of the entire sky been made so readily available. Anyone interested in exploring the wonders of our universe can quickly see where the stunning objects photographed by Hubble actually dwell in the heavens. Sky in Google Earth will foster and initiate new understanding of the universe by bringing it to everyone’s home computer," said Dr. Carol Christian of STScI, who co-led the organization’s Sky team with Dr. Alberto Conti. The announcement follows last month’s inclusion of the NASA layer group in Google Earth, showcasing NASA’s Earth exploration. The group has three main components, including Astronaut Photography of Earth, Satellite Imagery, and Earth City Lights. Astronaut Photography of Earth showcases photographs of the Earth as seen from space from the early 1960s on, while Satellite Imagery highlights Earth images taken by NASA satellites over the years and Earth City Lights traces well-lit cities across the globe.

Google Earth combines satellite imagery, maps and the power of Google’s search service to make the world’s geographic information easily accessible and useful. There have been over 200 million unique downloads of Google Earth since the product’s launch in June, 2005. Google Earth can be downloaded for free at earth.google.com.

Google’s innovative search technologies connect millions of people around the world with information every day. Founded in 1998 by Stanford Ph.D. students Larry Page and Sergey Brin, Google today is a top web property in all major global markets. Google’s targeted advertising program provides businesses of all sizes with measurable results, while enhancing the overall web experience for users. Google is headquartered in Silicon Valley with offices throughout the Americas, Europe and Asia. For more information, visit www.google.com.

Google, Keyhole and Google Earth are trademarks of Google Inc. in the United States and/or other countries. All other company and product names may be trademarks of respective companies with which they are associated.