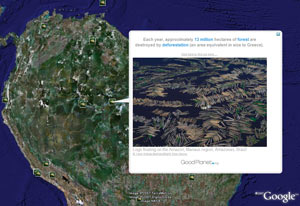 Almost 500 photographs by French photographer and environmentalist Yann Arthus-Bertrand have been unveiled in Google Earth today. The photographs are presented as a layer in Google Earth with striking facts and figures about the state of the globe today. Yann Arthus-Bertrand and his non-profit organization GoodPlanet.org aim to promote environmental sustainability by highlighting the beauty of the planet and the issues it faces through his photography.

The layer, which is called "Earth from Above," will be regularly updated with new photographs plus facts and figures by GoodPlanet.org, using data from various agencies around the world. It will be accessible from the Global Awareness folder in Google Earth, home to a number of layers highlighting environmental and humanitarian issues. To access the Global Awareness folder, users should go to the Layers folder in the left hand toolbar in Google Earth. Google Earth can be downloaded for free from: earth.google.com

The stunning Yann Arthus-Bertrand photographs can also be accessed on iGoogle, the personalized Google homepage. By adding the "Earth from Above" gadget to their homepage, users can discover a new photograph each day and pinpoint its location on Google Maps.

The layer, iGoogle gadget and introductory video can be accessed from the "Earth from Above" microsite: www.google.com/earthfromabove. The Earth from Above will be available in 14 languages: French, English, German, Arabic, Chinese, Korean, Spanish, Italian, Japanese, Dutch, Polish, Portuguese, Czech and Russian.