Introducing the next generation of Sky in Google Earth 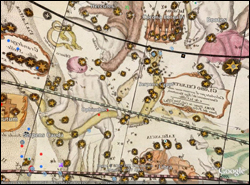 This morning at the American Astronomical Society in Austin, Texas, Google Engineering Director Andrew Moore announced a new version of Sky in Google Earth. Sky now includes several new features that provide scientists, students and amateur stargazers with new tools to explore the millions of stars and galaxies visible in Sky, get up to date on current sky events, learn basic concepts of astronomy, see historical sky maps and much more:

Earth & Sky Podcasts: podcasts about stars, galaxies, planets and events coming up in the sky from the NPR program Earth and Sky

Historical Sky Maps: a favorite in Google Earth, David Rumsey’s historical maps of the sky date back to 1792 and illustrate how conceptions of the sky have changed over time. Also available is a beautiful Constellations Art layer based on engravings by astronomer Johannes Hevelius from 1690 Grand tour of the sky: the best of Sky imagery in a tour that takes the user through 100 of our favorite spots in the Sky

Sky community: The best content published by the Sky community on the Sky discussion forums

To access Sky, users need only click "Switch to Sky" from the "view" drop-down menu in Google Earth, or click the Sky button on the Google Earth toolbar. The interface and navigation are similar to that of standard Google Earth steering, including dragging, zooming, search, "My Places," and layer selection.

Also introduced today, the Sky API will enable developers to develop their own sky mashups using the extensive sky imagery. Already several partners have implemented the API: Night View from the folks at www.heywhatsthat.com and a version for the iPhone from Alasdair Allan