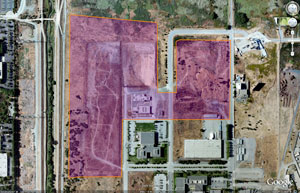 Overview of the area.

Under the terms of the 40-year agreement, Google will lease 42.2 acres of unimproved land in NASA Research Park at Ames to construct up to 1.2 million square feet of offices and research and development (R&D) facilities in a campus-style setting. An overview of the area is available in Google Maps™ and the Google Earth™ program at maps.google.com/googleameslease.

"With this new campus, we will establish a new era of expanded collaboration with Google that will further enhance our Silicon Valley connections," said Ames Director S. Pete Worden. "This major expansion of NASA Research Park supports NASA’s mission to lead the nation in space exploration, scientific discovery and aeronautics research."

"This long-term lease agreement is a key component of Google’s strategy for continued growth in Silicon Valley," said David Radcliffe, Google’s vice president of real estate and workplace services. "We believe this collaboration between Google, NASA and the city of Mountain View is emblematic of the mutually beneficial partnerships that can be created between the public and private sectors."

Under the terms of the lease, Google will pay NASA an initial base rent of $3.66 million per year. This rate is based on appraisals establishing fair market value of the land. NASA will use the proceeds to cover the full cost of the lease and the balance for maintenance, capital revitalization, and improvements of the real property assets at Ames.

The 40-year lease provides for periodic escalations and adjustments of rent. Google may extend the lease for three 10-year terms. After that, NASA and Google may agree to extend the lease two additional 10-year terms. If all extensions are exercised, the lease term will be a total of 90 years. NASA will retain control over the project during its construction phase, including approving the design, issuing building permits, conducting inspections and monitoring construction.

Construction will proceed in three phases. The first phase is planned to begin by the end of September 2013, the second phase by 2018 and the third by 2022. While the majority of the development will consist of office and R&D space, Google also plans to construct company housing and amenities such as dining, sports, fitness, child care, conference and parking facilities for its employees, as well as recreation and parking facilities and infrastructure improvements for NASA’s use.

Today’s announcement is the latest in a series of collaborations dating back to September 2005, when NASA and Google announced plans to work together on a variety of technology-focused R&D activities. NASA and Google signed a memorandum of understanding that year, launching negotiations for this development in NASA Research Park. Located at Ames, NASA Research Park is a world-class, shared-use educational and research-and-development campus.

Since signing the memorandum of understanding in 2005, NASA and Google have begun collaboration on several joint projects. The Planetary Content project develops software that makes it easier for the science community to publish planetary data via the Internet. This project has already provided high-resolution lunar imagery and maps to the Google Moon™ program and resulted in the "NASA" layer in Google Earth.

Google’s innovative search technologies connect millions of people around the world with information every day. Founded in 1998 by Stanford Ph.D. students Larry Page and Sergey Brin, Google today is a top Web property in all major global markets. Google’s targeted advertising program provides businesses of all sizes with measurable results, while enhancing the overall Web experience for users. Google is headquartered in Silicon Valley with offices throughout the Americas, Europe and Asia. For more information, visit www.google.com.

Google, Google Earth, and Google Moon are trademarks of Google Inc. in the United States and/or other countries.
Other trademarks are the property of their respective owners.