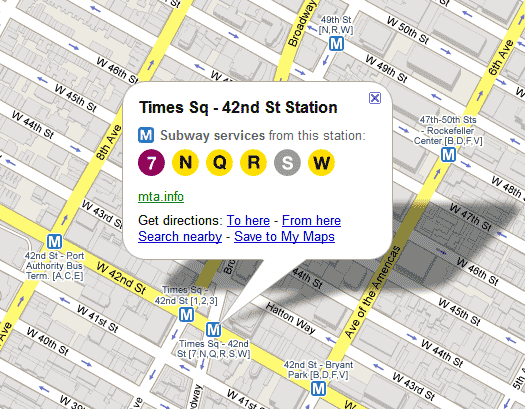 Today, we are excited to announce that Google Maps will feature route and schedule information from New York’s Metropolitan Transit Authority (MTA), the largest public transportation agency in the United States. Figuring out how to get around the metropolitan area on subways, buses and regional rail is now just clicks away in Google Maps.

Being able to plan public transit trips in Google Maps makes it easier than ever to take advantage of all that New York has to offer. With this new partnership, users can get detailed itineraries that utilize any MTA services across its 5,000-square mile service area. Itineraries will include three routing options, complete with station locations, schedule times, transfer information, total trip time, and step-by-step walking directions. Icons for MTA train and bus stops will now be visible on Google Maps which heightens awareness of the availability of public transit options for users who are exploring an area; when clicked, the icons will display the routes serving the stop and upcoming departures. Additionally, when a user searches for driving directions within the MTA service area, a public transit itinerary will appear as an alternative. Need directions while on-the-go? Transit routing is also available on many mobile phones via Google Maps for mobile.

The MTA joins more than 75 other transit agencies spanning 12 countries that have joined the Google Transit program. To learn more about today’s announcement, head to maps.google.com/nyc.