Google Earth has long offered users the opportunity to explore their planet with just a few mouse clicks. Today, a few clicks have become a few flicks, with the release of Google Earth for iPhone and iPod Touch. Users will have the whole world in their hands – not to mention their pockets, purses, and backpacks – and can engage Google Earth as they never have before, zooming from location to location and experiencing the app’s unique features on Apple’s mobile devices. The Google Earth app displays the same imagery and offers the same navigational capabilities as the desktop client and at launch will feature layers with geo-located Wikipedia articles and Panoramio photos, as well as map labels and borders. Available in 18 languages, Google Earth can be downloaded for free from Apple’s App Store (accessible through iTunes) and will be compatible with first and second generation models of both iPhone and iPod touch operating on EDGE, 3G, and other WiFi networks. Navigation in Google Earth is simple and intuitive, letting users’ imaginations do the work of exploring an app that puts a trip around the world at their fingertips. 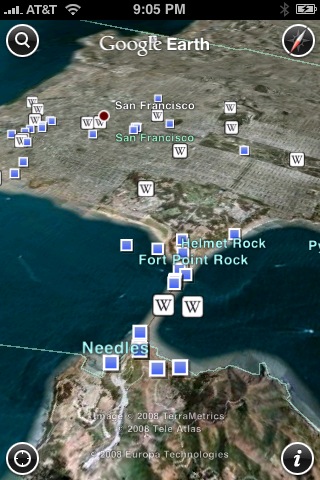 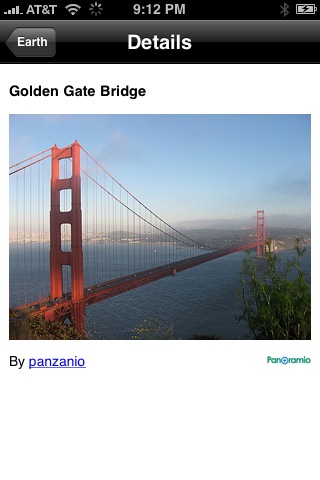 Whether a place of interest is thousands of miles away or just around the corner, Google Earth makes it accessible to the user, regardless of where they may be. For example, waiting in New York for a flight to San Francisco, a user could use Google Earth to learn about the City by the Bay and plan an entire vacation before ever fastening their seatbelt. After directing Google Earth to San Francisco on their iPhone, they could read Wikipedia entries about Cable Cars and Fisherman’s Wharf, check out user-contributed Panoramio photos of the Golden Gate Bridge, search for hotels and take a quick aerial tour around the city, all with a few screen touches.

Google Earth becomes even more practical after this user touches down on the West coast, as the app takes advantage of iPhone and iPod Touch’s mobile technology:

* With the ‘Search Near Me’ function, query results will not only be geo-located within Google Earth, but also will be automatically relevant to the user according to their location. For example, in San Francisco, a search for ‘pizza’ will show the precise location of a collection of San Francisco pizza restaurants in Google Earth. How does the app know the user is in San Francisco? Users choose to allow the app to approximate their locations using GPS, WiFi, or cell tower ID information, the results of which are deleted each time users exit the app. 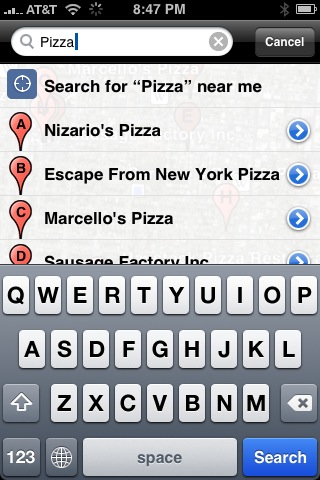 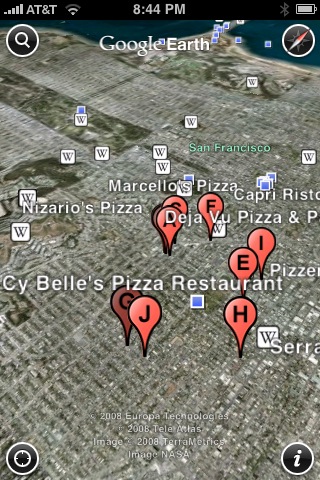 * Knowing San Francisco, one of those pizza joints will be at the top of a hill, and after a day of sightseeing, users may want to know if they will have to earn their pizza dinner. To preview their walk, they could use the ‘auto tilt’ function which, using the device’s built-in accelerometer, enables users to change their view in Google Earth simply by tilting their device.

* Finally, if a user decides to relax and hail a cab, they can choose to follow the progress of their trip within Google Earth. After tapping the ‘Location’ button, a blue dot will show an approximation of where they are, and as this position changes, the dot, and the user’s view in Google Earth, are updated accordingly.

As of today, the globe is not only explorable, it’s portable as well. For more information, visit the Google Lat Long Blog.
Give Google Earth on iPhone a try, download it here.