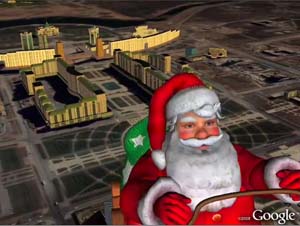 He made his list, he’s checked it twice. Santa and his reindeer are ready for their flights! Because of Google’s work with NORAD (North American Aerospace Defense Command), children around the world will again be able to follow Santa’s journey in Google Earth and Google Maps this Christmas. NORAD has been tracking Santa for over 50 years through its NORAD Tracks Santa program and this year Google is again enabling anyone to follow Santa around the world as he delivers his gifts. Of course, the tracking itself doesn’t begin until Christmas Eve, but until then, families can find a new kid-friendly game or activity every day until December 24th, at www.noradsanta.org.

When Santa and his reindeer do take off at 6:00 am EST on Christmas Eve, a Google Map with Santa’s current location will appear at www.noradsanta.org and will be updated as his journey progresses. Users can also track Santa in 3D in Google Earth by downloading a special NORAD Tracks Santa KML. They can add the NORAD Tracks Santa iGoogle gadget to their iGoogle page anytime. Be sure to visit www.noradsanta.org to catch hi-res Santa Cam video of the sleigh zooming past various locations around the globe over the course of the night, and for locations without video, photos from Panoramio can be viewed in Google Maps. There are also a few new ways to track Santa this Christmas: users can track Santa on their mobile phones with Google Maps for Mobile, and can also follow his whereabouts on Twitter by adding @noradsanta.

Read more about Google’s partnership with NORAD on the Official Google Blog.