Users can dive into the ocean, travel back in time and visit Mars in the newest version of Google Earth

SAN FRANCISCO, Calif. (February 2, 2009) – Google Inc. (NASDAQ: GOOG) today announced the launch of ocean in Google Earth, a new feature that enables users of Google Earth to dive beneath the water surface, explore 3D underwater terrain and browse ocean-related content contributed by leaders in ocean science and advocacy. The new version of Google Earth also introduces Historical Imagery, a feature that enables users to virtually travel back in time through archival satellite and aerial imagery, Touring, which makes it simple to create a narrated tour in Google Earth and share it with the world and Google Mars 3D, which features hi-res imagery and terrain of the red planet. 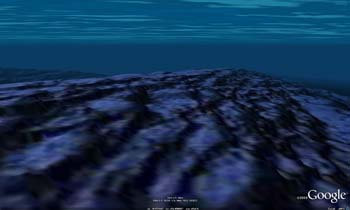 "With this latest version of Google Earth you can not only zoom into whatever part of our planet’s surface you wish to examine in closer detail, you can now dive into the world’s oceans that cover almost three-quarters of the planet and discover new wonders that had not been accessible in previous versions of this magical experience," said The Honorable Al Gore at this morning’s launch event in San Francisco. "Moreover, with the new historical imagery feature, you can look back in time and see for yourself the unprecedented pace of change taking place on the Earth — largely because of human influences. For example, you can watch the melting of the largest glacier in Glacier National Park—the Grinnell Glacier—image by image, for the last decade."

"In discussions about climate change, the world’s oceans are often overlooked despite being an integral part of the issue," said Eric Schmidt, CEO of Google. "About one-third of the carbon dioxide that we emit into the atmosphere ends up in the oceans. Furthermore, biodiversity loss in our oceans in the next 20-30 years will be roughly equivalent to losing an entire Amazon rainforest, but this goes unnoticed because we can’t see it. This is why today’s launch of Google Earth 5.0 is so important -it gives us an opportunity to change everyone’s perspective."

Ocean in Google Earth combines sea floor terrain and expert content to provide users with an opportunity to explore some of the most difficult-to-reach parts of the world. Virtual travelers to Hawaii, for example, can examine underwater volcanoes, see videos about the exotic marine life of the region, read about nearby shipwrecks and contribute photos and videos of favorite surf spots.

The ocean feature is on by default in the newest version of Google Earth. As users zoom in on the ocean they will see a dynamic water surface, and once they dive beneath the surface they can navigate 3D sea floor terrain. The feature includes 20 content layers, containing information contributed by the world’s leading scientists, researchers, and ocean explorers (for a full list of partners please visit earth.google.com/ocean/partners.html). These include:

"What this project helped me begin to understand," said John Hanke, Director of Google Earth and Maps, "is the role the ocean plays in global climate change and the impact that humans are having on the oceans and the creatures that live in it. It was a serious omission on our part not to include a better treatment of the oceans when we launched Google Earth, and I’m very happy that we’ve been able to address that. We now have a good substrate for publishing and exploring data about the ‘other’ two-thirds of the planet."

The new feature was developed in close collaboration with oceanographer and National Geographic Explorer-in-Residence Sylvia Earle and an advisory council of leading ocean advocates and scientists.

"I cannot imagine a more effective way to inspire awareness and caring for the blue heart of the planet than the new ocean in Google Earth, " said Sylvia Earle. "For the first time, everyone from curious kids to serious researchers can see the world, the whole world, with new eyes. In a stroke, Google Earth brings life and character to the blue part of the planet, and makes obvious the many ways land, water, atmosphere and living systems connect. Many ‘aha!’ moments are sure to come as people discover new patterns, new correlations, and countless personal discoveries while vicariously diving into the waters of the world."

The announcement was made this morning at the California Academy of Sciences in San Francisco, one of the nation’s leading institutions for scientific education and research. Following the announcement, local fourth graders participated in an interactive lesson on marine ecosystems, designed specifically by Academy educators to use the new ocean feature. “Information technology is key to the work that Academy scientists and educators do, and Google Earth is a leading example of such technology,” said Dr. Greg Farrington, Executive Director of the Academy. “Ocean in Google Earth opens up a new world of opportunities to explore and educate the public about the least understood parts of our planet.” 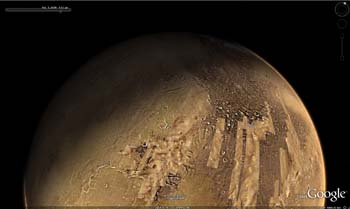 Google Earth combines satellite imagery, maps and the power of Google’s search service to make the world’s geographic information easily accessible and useful. There have been over 500 million unique downloads of Google Earth since the product’s launch in June, 2005. Google Earth can be downloaded for free at earth.google.com.

Google’s innovative search technologies connect millions of people around the world with information every day. Founded in 1998 by Stanford Ph.D. students Larry Page and Sergey Brin, Google today is a top web property in all major global markets. Google’s targeted advertising program provides businesses of all sizes with measurable results, while enhancing the overall web experience for users. Google is headquartered in Silicon Valley with offices throughout the Americas, Europe and Asia. For more information, please visit www.google.com.

Google and Google Earth are trademarks of Google, Inc. All other company and product names may be trademarks of the companies with which they are associated.