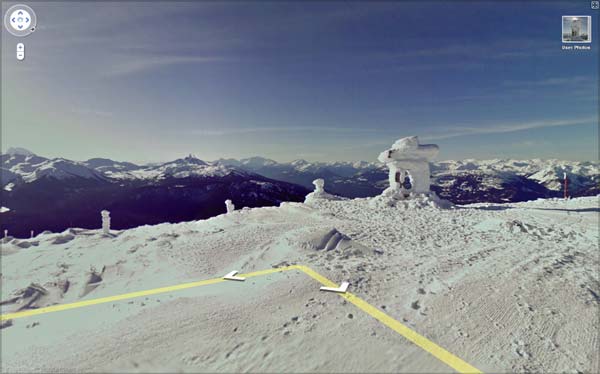 To help make information about the Games accessible and useful, Google released a new website and tools for sport fans around the world. The tools include a new website, available in 40 languages and combining up-to-date information and rich visuals—from Street View imagery of the competition venues to medal counts and news.

Google also introduced mountaintop Street View imagery from parts of Whistler Mountain. These images were the first collected by the newest experimental Street View system, a snowmobile equipped with state-of-the-art photographic and GPS technology. Games fans, skiers and snowboarders around the world can now pan across several Whistler runs as if they were there, and wind through Whistler Village and Whistler Creekside at the bases of Whistler Blackcomb Mountains. Google collected this imagery in partnership with Whistler Resort Municipality and Whistler Blackcomb Mountains.

Google’s website with information about the Games in Vancouver and Whistler also features:

Up-to-date medal counts, schedules and event results in 30 languages are available simply by searching on Google throughout the Games for specific sports, countries or the Games generally. Users around the world can also look forward to a special doodle each day from February 12 to 28, in celebration of the Games.

For those in Vancouver during the Games, Google has created a special transit trip-planner in Google Maps using updated routes and schedules for Vancouver, Whistler and the Olympic bus network. These transit directions are available at maps.google.com under "Get Directions", or at google.com/transit. Riders should be sure to check the official Vancouver 2010 website, Vancouver2010.com, for any scheduling or route changes before starting their trips.

More details are on the Official Google Blog. Enjoy the Games!